Red bean paste is a common component in East Asian desserts. The possibilities are endless, ranging from soup, dumplings, pastry fillings, and so much more! It can also be used in savory dishes.

Are Adzuki, Azuki, Aduki, and Red Mung Beans the same?

Yes! If you live in the U.S. and are shopping in at a traditional American market, you’ll most likely find them labeled as ‘Adzuki Beans’. Bob’s Red Mill is a brand that sells adzuki beans.

The scientific name for adzuki bean is Vigna angularis. According to the PFAF Database, it’s also another name for red mung bean.

Are Kidney Beans the same as Adzuki Beans?

Adzuki beans should not be confused with kidney beans. While they are in the same Favacace family, mung beans and adzuki beans derive from the Vigna genus, while the kidney beans are from the Phaseolus genus.

Adzuki bean (Vigna angularis) was domesticated in China about twelve-thousand years ago. It was introduced to Japan about 1,000 years ago and is now its sixth largest crop.

Through the lens Traditional Chinese Medicine (TCM), adzuki beans have been associated with aiding the kidney, bladder, and reproductive functions.

Thinking about changing up the flavor profile of your desserts? Try this red bean paste on top of toast, with oatmeal, or in your favorite Asian dessert.

Other ideas are red bean popsicles, which are my grandma’s (外婆) favorite treat. My grandma on my father’s side (奶奶) most famous, homemade dessert was her flatbread with red bean paste (dòusha guo bing/豆沙锅饼). The options are endless. I love finding ways to put an Asian twist on my favorite Western desserts – like my Red Bean Tiramisu and Vegan Red Bean Dessert Bars, which is my take of a bite-size, red bean popsicle with a cookie crust.

What’s your favorite way to use red bean paste? Comment below!

Becoming Your Own Biggest Health Advocate 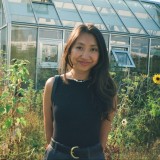